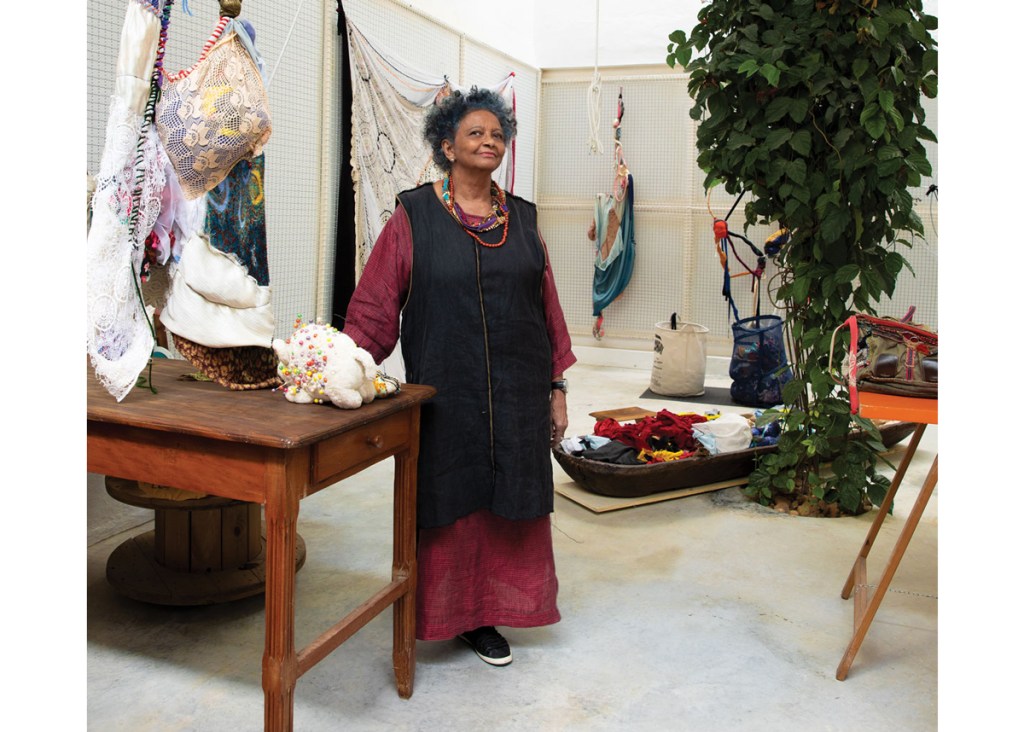 During the summer, the Brazilian artist Sonia Gomes was working on new bodies of work at various stages of completion for three different gallery exhibitions. For an exhibition that opened in August at Mendes Wood DM in SÃ£o Paulo, she was almost done with a series of installations related to earlier birdcage sculptures in which the lights act as ‘interventions’. She was also in the early stages of experimenting with sculptural murals that will be the basis for an exhibition at the Pace Gallery in New York next spring. But during a Zoom chat last July, her two-story studio in SÃ£o Paulo was engulfed in pieces under construction for a show that opens this week at Blum & Poe in Los Angeles. In progress, 20 to 30 works will be exhibited in the gallery, including a kind of centerpiece: When the sun rises in blue, a striking sculpture made of vibrantly colored textiles, including a curtain and fishnet, atop a white embroidered fabric called surrendered renascenÃ§a that one of his assistants had brought back from his hometown in northeastern Brazil.

As with all of her work, the new pieces draw inspiration from Gomes’ vast inventory of fabrics that people have donated, from a mother’s wedding dress and a grandmother’s towel to a grandmother’s t-shirt. yarns and household items such as tablecloths and bed throws. Some of the fabrics used in When the sun rises in blue have been part of his collection for almost 20 years, and each of them has its own story, memories and stories to tell. â€œThere is a relationship between time and reflection – all the materials I work with are an exercise in exploring the soul of these objects,â€ Gomes said. â€œIt is closely linked to the history of others.

A major influence on Gomes’ practice is poetry, with the titles of her work forming what she called a “poetic language” created over the years. â€œMy work is poetic, intuitive,â€ she says. “I feel it is coming from a mysterious place inside of me.” At the moment, Gomes was reading the concrete poetry of Ricardo Alexio, a writer from his native state of Minas Gerais, who recently wrote a poem about his art. And Maya Angelou has long been essential to her reflection, as a literary figure that she “always revisits”. (Gomes’ 2018 exhibition at the Museu de Arte in SÃ£o Paulo was titled “Still I Rise” after a poem by Angelou, and his numerous birdcage sculptures are in part a reference to the founding autobiography of ‘Angelou in 1969 I know why the caged bird is singing.)

Another important text for her is a 1998 essay titled â€œMarx’s Coatâ€ by literary theorist Peter Stallybrass, in particular a section which considers memorabilia of clothing and clothing belonging to the dead. â€œClothes come to me when people don’t want to get rid of an item but would like them to have a new destiny,â€ she said. â€œI transform them and they acquire new forms. This goes through the realization of the work and the respect I have for the stories that are given to me, which materialize in these objects.

Born in 1948 in CaetanÃ³polis, a A textile hub in southeastern Brazil, Gomes didn’t dedicate herself to art full-time until she was 45, after a career as a lawyer. But the will to create “has always existed in me, since I was a child,” she said, adding that her “first expression as an artist was fashion, using my body as a medium. expressed through clothes that I customized. When I was a teenager, I renovated my clothes and made my own jewelry. It made me follow a path, and where that path would end, I didn’t know. The need to create was greater than me.

Gomes presented his first solo exhibition at the Casa de Cultura de Sete Lagoas, a community cultural center in Minas Gerais, in 1994; but his next one will wait a decade, until 2004, before being exhibited at the Sandra & Marcio gallery in Belo Horizonte. â€œIt was difficult because I didn’t respect any commercial call,â€ she said. â€œNo one liked what I was doing. I showed it to people and no one understood.

As her fortunes changed, she started working with one of the main Brazilian galleries Mendes Wood DM, in 2011, and in 2015 she was the only Brazilian artist included in the main exhibition of the Biennale. of Venice, organized that year by Okwui Enwezor. â€œI thought the Venice Biennale was going to be the peak of my career and the end was about to follow,â€ said Gomes. “But to my surprise, that was just the start.”

After that, in 2018, she presented her first exhibitions in the great museums of Brazil, at the Museu de Arte in SÃ£o Paulo and at the Museu de Arte ContemporÃ¢nea in NiterÃ³i – and her star has continued to rise. Earlier this year, she participated in the Gwangju Biennale in South Korea and the Liverpool Biennale in the UK, both of which included examples from a series titled ‘RaÃ­zes’ (Roots), in which her designs fabric twist and blend with found pieces. in wood. These works, she said, â€œemerged from my desire to experiment with new materials. The trunks and roots I use were found on the banks of rivers. They carry a kind of strength that only exists in nature. It was a challenge to incorporate something so inflexible into my work, almost like a dissonant yet complementary fusion between the malleability of the tissue and the rigidity of the trunk.

For Gomes, it is important to seize the opportunities offered by certain materials: the wire is malleable, while the wood is rigid. Clothing can be cut and sewn (one sleeve removed, one pant leg closed) and filled with more fabric. “The cages,” she said, “are a beautiful object, but I don’t like their function, so the first thing I do is destroy them.” Recently, her engagement in jute, a raw fiber used in rope and twine that features in some of the works on her show Pace, has proven to be “very difficult for me, at the right time.”

She continued, â€œI listen to the material so that I can hear what he has to say. The materials I receive exhibit qualities that challenge me to address their own unique credentials. Every strange and unusual material that reaches me is a challenge.

Although Gomes takes different approaches for different shows, her practice is fluid and organic when creating works. â€œMy process is based on three pillars: freedom, resistance and courage,â€ she said. â€œThe process takes me to different places, and I don’t allow myself to be confined by rules. I often work on one project and then I have an idea that pushes me in another direction, so I like to start multiple projects at the same time, without needing to think about what will eventually be exhibited and where.

Gomes further explained: â€œI start all works together, because one work speaks to another. It is important to understand what they are saying to each other. They complete each other. The end of one work is the start of another. Sometimes I take part of a sculpture and put it in another because it’s important to connect them.

It is through this process that she comes to understand materials in order to transform them and give them a new life. Then the end point is clear. â€œThe artwork looks at me and says, ‘I’m ready.’ “

A version of this article appears in the October / November 2021 issue of ARTnews, under the title â€œSonia Gomes creates a sculptureâ€.