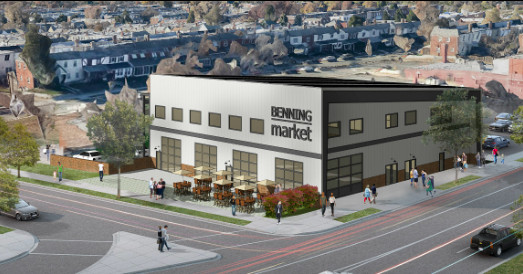 Entrepreneur Mary Blackford is set to open a 7,000 square foot food hall in northeast DC that will provide underserved communities in wards 7 and 8 with a place to purchase prepared foods and fresh produce from black-owned businesses. Blackford says construction of Market 7 (3451 Benning Road NE) is underway, and she hopes the market can open by the end of the year or early 2022. community pop-up markets in areas like the developing plot that once housed Fletcher-Johnson School.

Inside Market 7, eight food stalls will feature cuisines from across the African Diaspora. Residents will be able to purchase prepared foods and take out produce, and there will be a small hydroponic farm called the â€œLiving Pantryâ€. Located in a long empty building, Market 7 will have a very modern look, with garage doors that roll up in fine weather. Blackford sees it as a community gathering place that will host events such as demonstrations and cooking classes.

Blackford sees the project as a corrective measure to the “Food apartheid” that residents who live east of the Anacostia River face. She doesn’t like using the term â€œfood desertâ€ to describe the lack of grocery stores and fresh food options. â€œA desert looks like something that is a natural occurrence,â€ says Blackford. “But the disparity we actually experience east of the river in wards 7 and 8 is due to a long history of discriminatory practices against communities of color that have been intentional.”

Blackford wants Market 7 to illustrate how food can be healing and how improving your diet can help relieve health problems like diabetes. â€œThere is an access problem, but there is also an educational gap that we can [help with] too, â€she said. â€œI always like to say that our work is at the intersection of sustainable health, but also a sustainable economy for communities. We’re trying to bring the companies together to actually help address these food disparities issues and provide additional training. “

This idea of â€‹â€‹opening a market came to Blackford after living in Ghana during a teaching program at the university. The local collective markets filled with farmers and artists marked her. As a vegetarian, she struggled to buy food in her neighborhood when she returned home.

The pandemic caused more delays for Blackford than she expected, but she received a big boost last summer after winning a grant of $ 150,000 as part of a national competition for Gasoline for businesses run by women and owned by black people.

Market 7 also caught the attention of Whole Foods Market. Kathleen Wood Leverenz, the grocery chain’s senior Local Forager (aka local purchasing manager) is currently working with Blackford to identify entrepreneurs of color and to bring black-owned products to the shelves of Whole Foods in DC and the United States. -of the. Leverenz and Blackford created a pitch day to meet local designers.

Products available at Whole Foods which will also be sold at Market 7 include Soilful City’s Hot Seed Sauce, which is made with heritage peppers that have a connection to early African American farmers, as well as candles from Brothers Branchial Candle Co., run by three young brothers. The other two product lines are a spice blend made from Easy n ‘Tasty Jollof and Herbspice nutritional yeast.

â€œThey’re thrilled, they’re so happy about it,â€ Blackford said of the entrepreneurs’ response to the sale at Whole Foods. “Part of Market 7’s dream is to just see more black businesses on the shelves.”


Register to receive the newsletter